Summer is a great time of year to relish being outside and enjoy nature and all that it offers. Trees are a great way to escape the sun and many people appreciate the shade they offer, be it to enjoy a picnic with family, read a book or simply just to relax and do nothing at all. One thing most people don’t think about is diseases that trees are susceptible to. While there are many kinds of diseases, below are a few that trees in the Great Lakes region are prone to. 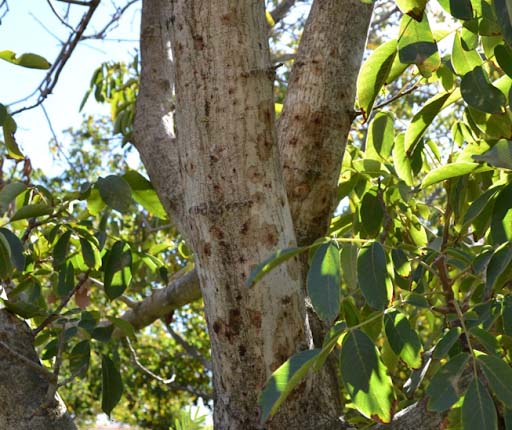 American Chestnut Blight: Chestnut blight attacks hardwoods. This disease is a fungus that has almost wiped out the American Chestnut as a commercial hardwood. However, the roots from trees that were harvested in past years may continue to produce sprouts that survive to saplings, there is no proof a cure will be found. The fungus is widespread and remains a common, non-lethal parasite on chinkapin, Spanish chestnut, and post oak.

Beech Bark Disease: Beech Bark Disease is a common defect in American Beech and causes significant death amongst these trees. The disease appears when bark is attacked and altered by the beech scale, which is invaded and killed by fungi.

Canker Rot: Canker Rot is a fungus that can cause serious decreases in harvesting of hardwoods. It is especially dangerous to red oaks. Heartwood (dense inner part of a tree trunk) decay is the most common and serious form of damage. However, the fungi can also attack and kill the cambium (cellular plant tissue) and decay the sapwood (soft outer layers of recently formed wood between the heartwood and the bark). This can occur as much as 3 feet above and below the initial canker point. Canker rots occur most commonly in the red oaks, but have also been found on hickory, honey locust, some white oaks, and other hardwoods.

Diplodia Blight of Pines: Diplodia Blight of Pines is most commonly found amongst Conifers. This disease attacks pines and is most detrimental to both native and exotic pines in 30 Eastern and Central states. This fungus is rarely found in natural pine stands (defined area of forest that is relatively uniform in species). Diplodia kills current-year shoots, major branches, and eventually the entire tree. The ramifications of this disease are found to be most detrimental in landscape, windbreak, and park plantings. Symptoms to look for are brown, stunted new shoots with short, brown needles.

Dutch Elm Disease: Dutch Elm Disease (DED) most commonly affects American and European species of elm. DED is a major dilemma throughout elms in the United States. The consequences of this disease include clogging of vascular tissues which prevents water circulation to the crown and causes visual symptoms as the tree wilts and dies. American elm is highly infectious.

Elytroderma Needle Cast: Elytroderma Needle Cast is most commonly found in Conifers. It is a needle disease that most commonly causes witches brooms (dense twiggy growth) in Ponderosa Pine. The disease is confined to “hard” or “two- and three-needle” pine species. And is sometimes mistaken for “dwarf mistletoe” (parasites of native conifer forests). The disease has been reported throughout the United States on lodgepole, big-cone, jack, Jeffrey, knobcone, Mexican stone, pinyon, and shortleaf pine.

Fusiform Rust: Fusiform Rust is most commonly found in Conifers. This disease will cause death within five years if a stem infection develops. The fungus, Cronartium fusiforme, requires an alternate host to complete its life cycle. Part of the cycle is spent in the living tissue of pine stems and branches, and the remainder of the green leaves of several species of oak.

Galls on Leaf and Twig: Galls on Leaf and Twig is most commonly found in Hardwoods. Common symptoms to look for are leaf infections (galls), which are bumps or growths caused by insects or mites feeding on leaves. The disease is most noticeable on the leaf, stem, and twig of an oak tree. While these galls may look like a serious problem, most are harmless to the overall health of the tree.

Oak Wilt: Oak Wilt, Ceratocystis fagacearum, is most commonly found in oaks (especially red oaks, white oaks, and live oaks). This disease is one of the most serious tree diseases in the United States, wiping out thousands of trees every year. The fungus begins in wounded trees, and these wounds help to further spread the disease throughout the tree. This fungus moves through the tree through using the roots or insects. There is no known cure.

Remember, these are just a few diseases that may affect trees in the Brookfield, Delafield and Waukesha area. If you feel that your tree may be exhibiting any of these symptoms or is simply not thriving contact our knowledgeable team today! We will discuss with you the options that are available to promote the health of the tree and those around it.